The sun has been shining through the blinds for at least an hour now and the family has been busy getting ready for work and school.

Bogey’s hips are sore from sleeping in one position all night and he knows getting up will be difficult, but Nature’s call finally wins out. He rises very slowly to his feet from his bed, then over-corrects and almost takes a header because he’s a bit unsteady. 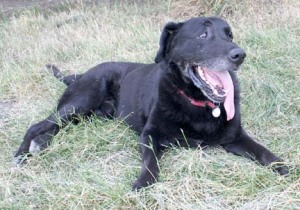 What happened to the days when he’d wake everyone up with the sun, jumping on the beds and giving a lick to the face before the alarm went off?

Bogey shuffles to the back door in short, choppy steps, hoping he makes it in time. His long nails scratch a slow cadence on the wood floors that seems like an ice rink. The discomfort and stiffness in his hips and lower back make progress slow, but he never complains.

A brief “woof” at the door, and someone opens the slider so he can go out. The cool air feels good, but the slippery steps down the porch, while only three, cause him to hesitate for several minutes while he contemplates which is worse – having an accident on the porch or falling down the steps.

After a slow amble around the perimeter of the backyard, he’s ready to come back in. Thank goodness no squirrels appeared to taunt his slow progress. This time, finding the strength to go up those three steps gives him pause. He heaves himself up and makes it up the first two, but slips on the wet porch at the third and lands on his left shoulder, torquing his neck. Warm, kind hands help him up and steady him as he makes his way back into the house. The stiff hips have loosened a bit, but his shoulder hurts from the fall.

Breakfast is in his dish and he’s hungry. Eating would be easier if the dish was raised off the floor, and he lies down in front of it to finish his breakfast. Everyone is about to leave for the day, so after a few welcome pats on the head, he heads in the direction of the front window and wags his tail as they hail their goodbyes. 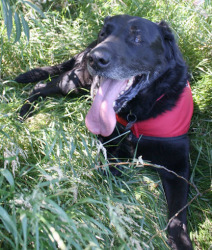 The house is quiet now. Bogey still takes his duty as guard dog quite seriously. His chin just fits on the window sill in the living room, and he stares dreamily out onto the front lawn and walk.

Suddenly, a German Shepard with a human attached appears in his line of sight and proceeds to relieve himself on the bush by the gate, turning his head to give a defiant look to Bogey in the window.

Bogey woofs loudly in protest and tries to make himself taller, but only manages to bounce his front feet off the floor a few inches a couple of times. He decides to let this transgressor pass.

The excitement is tiring and he heads towards his bed for a morning nap. The bed used to be upstairs, where he spent his nights guarding the family, but the stairs are too steep now and he’s too big to be carried. He had to settle for the move to the family room, but it’s lonely at night.

Try as he might to shift the bed’s soft padding with his front paws and turn three times for luck to find the softest spot, the ungraceful plop down onto the cushion sends waves of pain through his hips and back. He pants loudly for several minutes to keep from crying while the pain slowly subsides.

In what seemed like only a few moments, the front door bursts open and the family is home. Bogey realizes he’s slept the day away when a glance out the window shows long shadows are falling across the lawn.

Nature is calling again, and loudly, and he makes his way to the back door. This time, welcome hands help him down the steps, guarding him from falling, and he ventures further around the yard to the front, in no hurry to return to the house.

A leash is snapped on his collar and the front gate opens. Bogey does his best to cover the mark on the bush made by the offending German Shepard, but lifting one leg to stand on three is a wobbly challenge and he almost soils himself in the attempt.

Moving down the uneven sidewalk requires his full concentration, yet the feel of the breeze on his face and the attention of his human make his heart sing. He remembers the days when he used to fly down this street, pulling a kid on skateboard.

Bogey makes it to the end of the block, and though his heart is willing, his backend protests and he sits down, letting his human know that this is as far as he can go today. Maybe tomorrow he can go further. They return to the house and warm hands help him up the steps.

The walk rejuvenates his spirits and he visits everyone in the family while dinner is made and homework completed, resting his head on a lap here and nuzzling a knee for an ear scratch there.

Food appears in his dish again, but this time the dish is raised up on several books and he’s able to eat while standing. His tummy full, he makes his way back to his bed again, intending to listen in on the conversations at the dinner table, but his eyes grow heavy.

The next thing he knows, the house is dark and quiet again, and everyone else is upstairs. He tries to accept the loneliness of being apart from his “pack” while they sleep upstairs, but the separation never feels natural. The discomfort in his hips is singing a loud song tonight, and he pants again to deal with the pain. It finally subsides, and he lays his head down on the edge of his bed, listening, waiting, and remembering.

Osteoarthritis in older dogs and cats

The most common cause of mobility issues and discomfort in older dogs and cats is osteoarthritis. Older pets, large and small, suffer to some extent from osteoarthritis, also called degenerative joint disease.

Time, conformational differences, and excess weight can wear down the slippery cushions on the ends of bones, called cartilage. With cartilage wear, bones start rubbing against each other, causing pain and inflammation.

Osteoarthritis can occur in any joint, but is most common in hips, spine, shoulders, elbows, knees, and ankles. While there is no cure for osteoarthritis, the pain can be managed through a combination of traditional and alternative veterinary care, moderate regular exercise, weight control, special anti-inflammatory diets, and environmental adaptation.