Fall and early winter is prime time for spiders searching for warmer breeding grounds, and your home will do quite nicely for the randy Hobo Spider. Chances are, right now a male Hobo Spider is singing his own version of Barry White’s “Let’s Get in On” while making his way into your home in hot pursuit of a mate.

Hobos are a very common poisonous spider species in the Pacific Northwest, and we don’t want them near your curious kitty.

How to recognize a Hobo 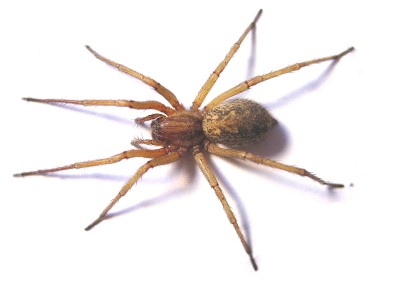 The Hobo (Tegeneria agrestis), also called the “aggressive house spider,” is a European species that entered North America via the Port of Seattle between 1920 and 1930.

Hobos are considered aggressive because of their willingness to attack. They weave funnel webs to catch insects, making flat, non-sticky webs often found near a home’s foundation or landscaping elements.

The Hobo’s inability to move on sticky or smooth, vertical surfaces is its ultimate weakness. He falls prey to other spiders’ sticky webs and can’t get out of sinks and bathtubs after seeking a drink.

For years, numerous reports of Hobo spider bites in the Northwest have been incorrectly blamed on the more infamous Brown Recluse spider because they have identical bite symptoms. The Brown Recluse however, doesn’t live west of Nebraska.

Hobos make two kinds of bites. About half are “dry,” where no venom is injected and the victim develops only minor redness.

A “wet” or venomous bite is not always painful, but a small, hard area typically appears within 30 minutes, surrounded by an expanding red welt that may reach several inches in diameter. Blisters form within 15-35 hours, which eventually crust over and the tissue beneath dies (becomes necrotic).

In severe cases, surgical removal of damaged tissue is required and may take months to heal, frequently leaving a permanent scar. A bite victim may also experience headaches, nausea, vomiting, and flu-like symptoms. No human deaths have been reported.

Don’t ‘sic’ your cat on a Hobo

Some articles state that cats are predators of Hobo Spiders. While many kitties love a good bug to chase, we do not recommend cats for Hobo control. For a good tummy churn, ask Dr. Monahan about the kitty patient who was bitten by a Hobo under the tongue, resulting in a large, very-slow-to-heal mouth wound. I

f you suspect your kitty has been bitten by a Hobo, please contact us right away at 206.323.4433 or seek emergency veterinary care.

How to control Hobos

If you have questions about Hobo Spiders, please check www.hobospider.org.

One Response to “The Hobo Spider: He Ain’t No Charlotte”