Did you know that domestic cats roam an average territory of 5 acres? That’s considerably larger than most people’s backyards (feral cats have even larger territories). 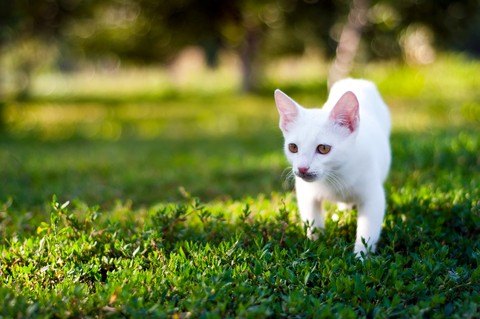 Outdoor kitties tend to exhibit fewer behaviors that humans find objectionable, like destructive clawing and urine marking, because their minds are stimulated chasing butterflies and checking out the neighborhood. They tend to maintain their body weight in a healthy range and refrain from excessive grooming because they get more exercise and don’t eat out of boredom.

They often get into fights with other cats over territory boundaries, risking dangers ranging from minor bite wounds and large abscesses to life-threatening viral infections.

They frequently pick up internal and external parasites (worms and fleas), which they can pass to their human companions.

And ornithologists (scientists who study birds) blame them for dramatic declines in wild bird populations.

Some just plain get lost and don’t find their way back home.

Beyond appropriate vaccinations, parasite prevention medications, a microchip, safety collar, and ID tag, what can be done to keep outdoor kitties safe and healthy?

These owners have constructed outdoor spaces for their cats to play, lounge, and explore that keep the cats (and birds, for the most part) safe while providing exercise, mental stimulation, fresh air, and a place to catch a sunbeam in warmer weather.

Some of these enclosures resemble three-season porches. Others enclose a portion of the backyard, keeping Fluffy contained and other animals out. Still others are an enclosure attached to the side of a house with a cat door in a window, providing easy access.

A local company called Catio Spaces works hard to improve cats’ lives by providing DIY catio plans and custom catios. This video shows how one family transformed their deck into a delightful catio.

Companies like Purr..fect Fence specialize in helping owners configure the space available into an aesthetically pleasing (from both the humans’ and cats’ perspectives) space for outdoor play.

However, more than half the cat yards I’ve seen were constructed from scratch with re-purposed materials by an ingenious owner who didn’t have a large budget.

If you’re interested in cat fending, there are lots of ideas and pictures on the internet to consider. Check it out! And please send us pictures if you build one for your lucky kitty.