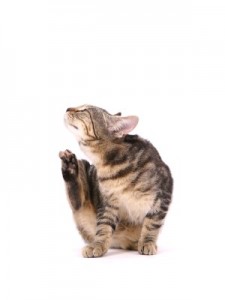 More than an itchy nuisance, fleas are blood-sucking, disease-spreading insects.

They’ve been around since before the dinosaurs, yet were wily enough to survive whatever it was that ended the dinosaurs’ reign.

They were responsible for spreading the bacteria that causes The Plague, a disease that killed thousands in Europe during the Dark Ages and is still found today in places as near as Eastern Oregon.

Cats infected with M. haemofelis come into the hospital severely depressed and vomiting. They often have a fever and pale white, yellow-tinged gums from the severe anemia caused by red blood cell destruction. Diagnosing the underlying cause of the profound anemia requires laboratory tests because other diseases have similar clinical signs.

After diagnosing M. haemofelis, cats are treated with appropriate antibiotics and anti-inflammatory drugs for 2-3 weeks. Some cats require expensive, life-saving blood transfusions and several days in the hospital. While treatment usually improves the anemia, affected cats may remain carriers and a reservoir for fleas to bite, then spread the bacteria to the next cat.

How to prevent M. haemofelis

Thankfully, preventing M. haemofelis in cats is much easier these days with regular, year around use of topical flea preventive medications, such as Revolution and EasySpot (similar to Frontline).

With our temperate weather, we see fleas in all seasons in Seattle, although the heaviest concentration is typically July through October. Ask us how to help protect your kitty!