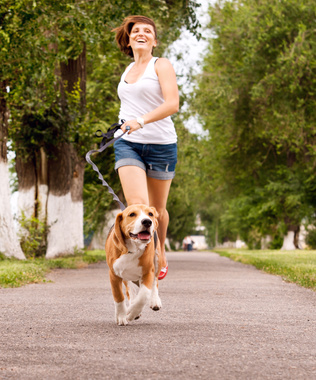 “Hey Doc, when can I run with my puppy?”

Veterinarians get this question a lot, and the answer is: It depends.

While vets are huge fans of regular exercise for dogs’ emotional and physical health, we recommend holding off running with a dog until its musculoskeletal system is fully mature.

And, some breeds of dogs just aren’t born athletes, like Pugs, Frenchies, and Boston terriers. These smooshy-faced breeds should probably never be running partners.

Does that mean a puppy shouldn’t run at all?

Of course not, all puppies are going to run – around the house, around the yard, and around the park (only after completing their puppy vaccine series, please). But there’s a difference between short bursts of speed around the yard vs. miles of pounding the pavement or trail.

Running longer distances too early and without appropriate training puts a great deal of stress on immature joints and ligaments, making a dog more susceptible to arthritis later in life. The musculoskeletal systems of various dog breeds and sizes mature at different rates.

Large and giant breeds, like retrievers and Great Danes, aren’t full mature until they are 18-24 months old.

The human equivalent might be Olympic gymnast Mary Lou Retton, who began tumbling in kindergarten, but required a hip replacement in her mid-thirties.

Here’s a great article that discusses some additional issues to consider before taking your dog for a run: https://tinyurl.com/y7wpzpb9