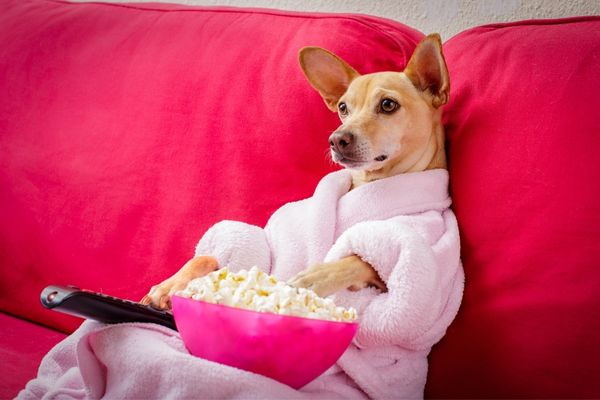 The holiday season is a great time to watch heartwarming Christmas movies. It’s especially fun when the flicks feature our favorite furry friends.

Get out the popcorn and your pets’ favorite treats, cuddle up and watch these Christmas classics.

The Bannister family’s newly adopted and crafty canine, Zeus, saves its home from two bumbling thieves while the family is away at Christmas.

A developmentally challenged young man with a penchant for caring for animals in need sets out to convince his family – and their whole rural community – to participate in a local shelter’s inaugural “Adopt A Dog for Christmas Program.”

When Henry the elf flees the North Pole with Santa’s sleigh and his magical bag of toys, he crash-lands the precious cargo in a suburban neighborhood tree. But when the bag ends up in the wrong hands, it’s up to heroic St. Bernard, Beethoven, and his teenage pal, Mason, to rescue Henry, fetch Santa’s toys and save Christmas for children everywhere.

“That’s what Christmas is all about, Charlie Brown.”  -Linus

When Charlie Brown complains about the overwhelming materialism of the Christmas season, Lucy suggests that he become director of the school Christmas pageant. Charlie Brown attempts to restore the true meaning of Christmas by buying a neglected Christmas tree. Snoopy, his faithful sidekick, definitely knows how to decorate a dog house.

In the town of Whoville, the Whos are filled with excitement about celebrating Christmas. The only one who is not amused is the grumpy, cantankerous and green-furred Grinch, born with a heart “two-sizes too small.” He lives in his cave with trusty sidekick, Max, the dog. This computer-animated fantasy/comedy is based on Dr. Suess’s 1957 book, How the Grinch Stole Christmas.

Though Rudolph is undoubtedly the hero of this story, Yukon Cornelius and his loveable team of sled dogs steal the show. With timeless Christmas songs and a heartwarming lesson about accepting the differences of others, this Christmas classic is one you and your kids can watch again and again.

Clip of Yukon Cornelius and the sled dogs:

With Christmas approaching, a handsome fireman afraid of commitment adopts a stray cat and meets a beautiful veterinary student who challenges his decision to remain a confirmed bachelor.

In this sequel to The Nine Lives of Christmas, Zachary and Marilee are thrown back together at Christmas when they’re tasked with finding homes for a litter of adorable kittens.

Grumpy Cat is a lonely cat living in a mall pet shop. Because she always gets passed over and never gets chosen by customers, this kitty develops a sour outlook on life until… one day during the holidays, a very special 12-year-old girl enters the pet store and falls in love with Grumpy Cat.

Santa is allergic to cats, so he has a policy against delivering them as gifts. But little Tommy has been SO good, and all he wants is one kitty. Instead of one, the whole litter climbs into Santa’s sack. When Santa has an allergic reaction, the kitties have to take over and deliver the presents on time.