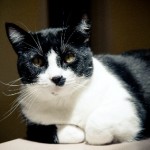 Allowing us cats to roam outdoors is a decision that requires careful consideration.

There are camps on both sides of the issue, passionate about their opinions regarding whether we cats should to be allowed to roam, as we’re not a native species to North America and there are dangers out there.

Recent research has shown owned cats roam an average territory of 5 acres, considerably larger than most people’s backyards (feral cats have even larger territories). I used to be one of those guys, wandering the streets of Lynnwood looking for the lady cats.

Beyond neutering, vaccinations, parasite prevention medications, a microchip, safety collar, and ID tag, what can be done to keep our outdoor feline colleagues safe and healthy? And what about our impact on the outside world?

The benefits of allowing a cat to roam 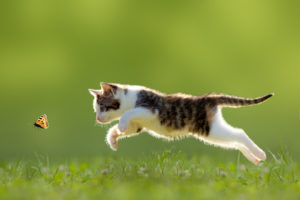 On the one hand, kitties allowed outdoor access tend to exhibit fewer behaviors you humans find objectionable, like destructive clawing and urine marking – a stimulated mind is a healthier mind.

My kitty counterparts allowed outdoors are more likely to maintain their body weight in a healthy range and refrain from excessive grooming because they get more exercise and don’t eat out of boredom.

The drawbacks of allowing a cat to roam

They often get into fights with other cats over territory boundaries, risking dangers ranging from bite wounds and abscesses, to life-threatening viral infections like feline leukemia (FeLV) and feline infectious viremia (FIV).

They frequently are exposed to internal and external parasites (intestinal worms, fleas, mites, ticks), which they can pass to their human families.

Ornithologists (those scientific types who study birds) blame them for dramatic declines in wild bird populations.

And some cats just plain get lost and never find their way back home.

But there’s a compromise I’d like you to consider that’s gaining popularity: outdoor cat yards. In the 10+ years of providing house calls for cats throughout the Seattle area, our doctors have seen an amazing variety of cat yards exhibiting cat families’ creativity and love for their furry friend(s).

Using a  wide variety of configurations and materials, folks have constructed outdoor spaces for their cats to play, lounge, and explore that keep the cats (and birds, for the most part) safe while providing exercise, mental stimulation, fresh air, and a place to catch a sunbeam in warmer weather.

Some of these enclosures resemble three-season porches; others enclosed a portion of the backyard, keeping a kitty contained and other animals out; still others were an enclosure attached to the side of a house with a cat door in a window, providing easy access. I’m secretly jealous and have been promised a cat yard “someday” when we remodel. Sigh…

There are companies, like Purrfect Fence, that specialize in helping cat people configure the outdoor space they have available into a pleasing (from both the humans’ and cats’ perspectives) outdoor play space.

However, more than half the cat yards our docs have seen were constructed from scratch with re-purposed materials by ingenious owners who didn’t have a large budgets.

If you’re interested in outdoor enclosures for your kitty, I’ve heard there are lots of ideas and pictures on the internet.  Just do an image search for “cat yards” or “cat enclosures.”

Please send me pictures if you build an enclosure for your lucky kitty!