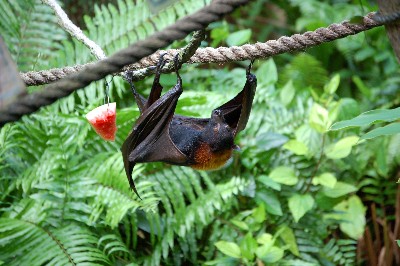 All mammals, including bats and humans, can contract rabies through a bite or contact with saliva from a rabies-infected animal (alive or dead). Unfortunately, bat bites in humans can be tiny and often go undetected.

According to the Washington State Department of Health, the incidence of rabies in wild bats in Washington is estimated to be 1%.

However, the incidence of rabies in bats found indoors and submitted for testing is as high as 10%.

While rabid raccoons, skunks, foxes or coyotes have not been identified in Washington, the virus can be transmitted from bats to these mammals. In the past 20 years, two humans and several domestic animals have died of rabies in Washington.

Bats are a tremendously important part of our ecosystem and found on every continent except Antarctica. Thanks to flight, they are one of the most widely disseminated groups of animals in the world.

There are more than 1000 different species of bats throughout the world, ranging in wing span from 5 inches to 5 feet. Many species of bats help control noxious insects, like mosquitoes and insects that damage food crops. Other species are important to fruit pollination.

Washington bats, for the most part, are quite small, and can squeeze through an opening as small as 1-inch by 5/8-inches, according to information found on Bats Northwest. Attics and walls provide good roost sites and bats often enter homes where the sides of a house meet the roof or chimney.

“Cats are especially susceptible because they are natural hunters of flying creatures and often catch bats. The bat’s only defense is to bite.”

“It is very important to have your pets vaccinated against this disease, even if they are ‘indoor’ pets. Bats sometimes find their way into houses and an unvaccinated pet that is exposed may have to spend months in quarantine or be euthanized,” the website states.

Even the sleepiest house cat cannot ignore the Call of the Wild when a “winged mouse” is flapping around the house, looking for a way out. If you find a bat inside your home or outside on the ground, don’t touch it with bare hands or release it outside. Trap the bat under a container and contact your county health department to have the bat tested for rabies.

If a bat is found in the house while you’re sleeping but escapes before you can trap it, health officials often recommend rabies prophylaxis for people and pets in the household to safeguard against a potentially unknown bite.

Since 2012, rabies vaccines have been mandatory for all cats, dogs, and ferrets living in Washington State.

We typically recommend puppies and kittens receive their first rabies vaccine at 16 weeks of age. A booster vaccine should be administered one year later, and then every 3 years for dogs and annually for cats (who receive the gentler modified live rabies vaccine).

To schedule a rabies vaccination for your cat, call Atlantic Veterinary Hospital at 206.323.4433 or e-mail us.